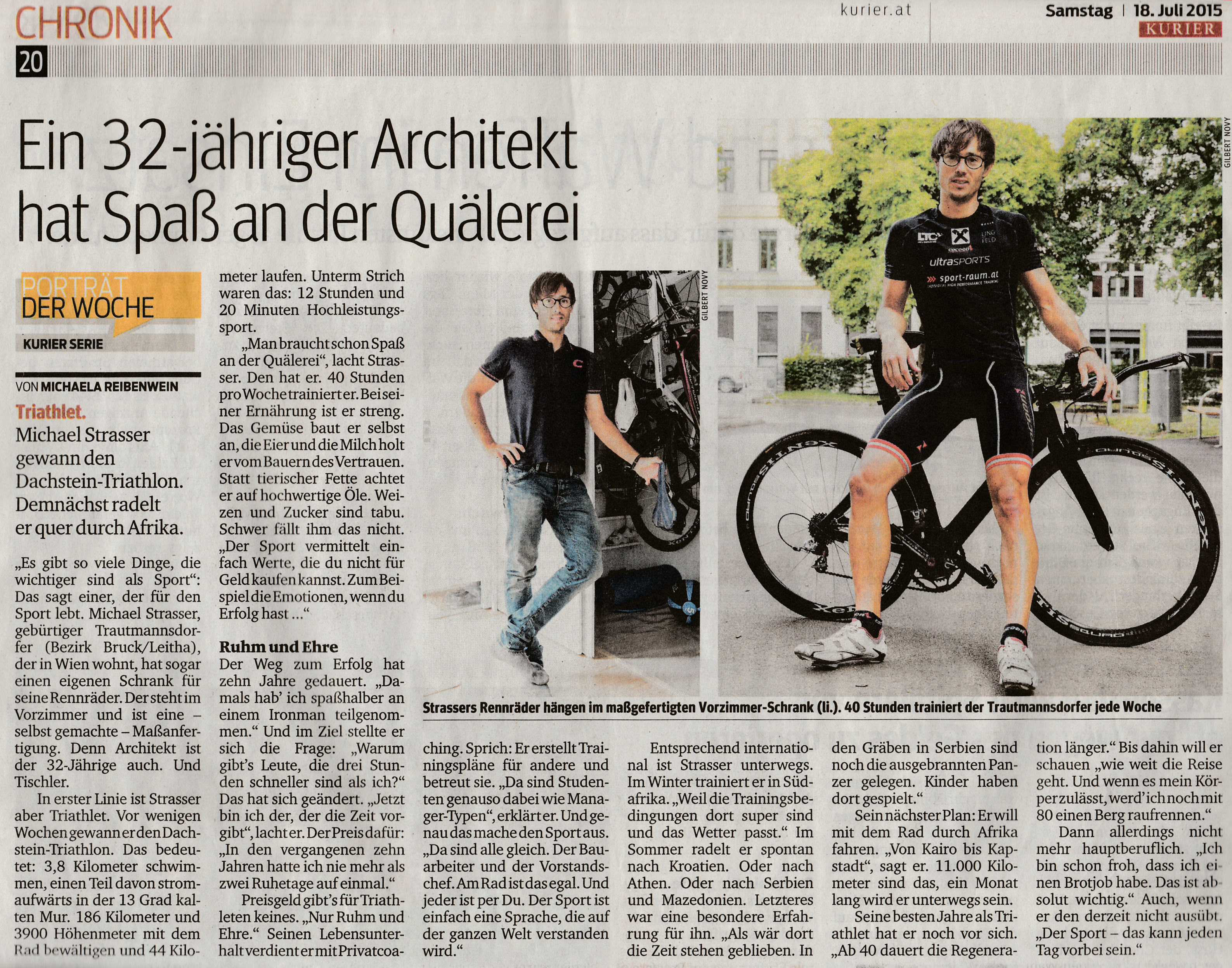 Michael Strasser is the winner of the Austria eXtreme Triathlon 2015. Now he is approaching his next challenge in Africa. “There are many things in life which are more important than sports“ says the ultra-sports man Michael Strasser, who is actually spending the majority of his day doing sports. Born in Styria (Trautmannsdorf, Bezirk Bruck/Leitha), he is now living in Vienna, has an educational background in architecture and has worked several years in the carpenter business. Hence it is no wonder that he customized his own bike cabinet. Others go with a shoe rack in the entrance room, Michael set up his inhouse bike storage. However, first and foremost, he is a passionate triathlete who is looking for the extreme borderline. In June this year he conquered his limits and finished the Dachstein Triathlon as winner: 3.8 km swimming, partly upstream, water temperature 14 °C, 3,600 altitude difference, 186 km biking, 44 km running, 1,800 altitude difference. Certainly breathtaking (in and by nature)! The race itself is not about the finishing time rather than crossing the finish line at all. It took him 12 hours and 20 minutes of high performance.

Michael exercises 40 hours per week and is quite disciplined about his nutrition. He plants his own vegetables, gets milk and eggs from a nearby farmer, avoids animal fats and prefers high-quality oils. Moreover he has banished wheat and sugar from his dietary list. “Sport transports a lot of values, which provide me more pleasure than any other stuff. When you are successful, e.g. you cross the finish line at first, a lot of emotions are being released. That’s an incredible feeling, not comparable with anything else.” It took him 10 years to ride the road to success. Back then he participated in an Ironman triathlon just for fun (Yeap, Ironman – just for fun!). One question was bothering him after the race permanently, “Why are there others faster than me, even more than three hours?” Well, this has undoubtedly changed. Today he is the pacemaker! The price he has paid for tells another story, “During the last 10 years there were never more than days of rest in a row.” Yeah, you definitely need to enjoy torturing yourself to succeed in this kind of “business”.

As triathlete you do not earn trophy money, it is rather about glory and honor. This certainly does not pay his living costs. Thus Michael is also working as private coach, prepares individual workout schedules and exercises with his clients. “There is no difference between the CEO and the construction worker. On the bike everybody has to face the same challenge – to overcome one’s fitness level.” If you ask Michael, he will emphasize that this is the most valuable thing about sport. “It’s a passion as well a language, which is being appreciated throughout the world.” This might also be a reason why Michael is spending several weeks abroad to exercise in different countries. During winter time he is going to South Africa, enjoying the good weather condition, in summer he is spontaneously cycling to Croatia, or to Athens, or through Serbia and Macedonia. In Serbia he was deeply touched by the fallout of history. There were still gutted tanks, which were used by the children as there playground – emotional pictures which have definitely encouraged him to work on his own charity project.

Now he is facing his new challenge on the bike in Africa. He is planning to cycle from Cairo to Cape Town to set a new world record (www.cairo2cape.com): 11,500 km within 40 days. That is the master plan. The kickoff is scheduled for February 2016. Next to the sporting challenge he is also dedicating this project to his recently founded organization Racing4Charity in order to support unprivileged children (http://www.racing4charity.co.at/).

As triathlete he is planning to proceed as long as his body allows him to do so. “The regeneration phase takes much longer at the age of 40. However, let’s see where my journey will take me”. Michael is aware of the fact, that his sport career can be finished from one day to the other. “It is reassuring to have a backup plan. I want to continue working as an architect once I won’t be able anymore to professionally do sports.” Until then he keeps on cycling for his passion and his charity projects.